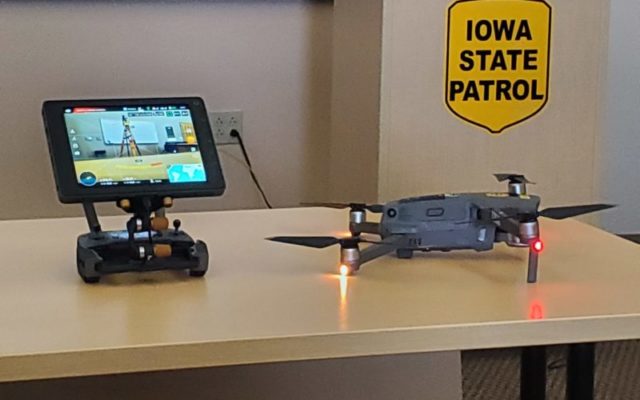 State Patrol spokesman Sergeant Alex Dinkla says while their current “total system” technology does a good job of documenting a crash scene, the drone system can document things quickly.  “The only disadvantage for us in using that is it sometimes it could take several hours to investigate a crash scene. So as we are out there, if we’re out there on the interstate and we have maybe the interstate shut down for several hours, we know that there’s a lot of people that are affected by that. This new technology, once we become fully proficient with that our hope is to maybe be able to map a crash scene in 20 to 30 minutes is what our hope is.”

Trooper Mark Anderson of the patrol’s Fort Dodge office is one of eight full-time collision reconstructionists who are assigned to use the new technology. He says once he arrives at a crash scene he can right away start documenting things.  “Depending on what the scene is, if I can get deploy it right away, I can take photographs while they’re still working at the scene, it doesn’t have to be emptied with the emergency personnel or anything to that effect. I can fly scene, take my photographs from the air, we can get the vehicles removed, and clear the roadway and open it up to the public, which is our main goal, to get everything back to normal as quick as possible.”

Thompson says crash scene investigations have come a long ways from using tape measures to now using drone technology.  “ We had just tapes back then when I started working to measure scenes. Now we’re flying UAVs to take mapping from the from the air, so technology is awesome. The end product is just spot-on. Measurements we can do on the computer are just phenomenal. What we can do with the 3D model to show our county attorneys and their juries in a criminal setting what it looks like from drivers’ perspectives, it’s just that much better to help in court purposes.”

Two of the new drones will be implemented in each quadrant in the state.

See the video below that includes a demonstration of the drone held today at the State Patrol’s Mason City office as well as see what happens with the photos taken from the drone.