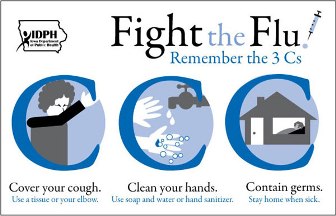 MASON CITY — At least five cases of the flu have been reported in Cerro Gordo County.

The County Health Department’s infectious disease nurse Jeni Stiles says when compared to previous years, these first confirmations of influenza in the community this year are a little later than typical. “Last year I think our first case that we confirmed was maybe toward the beginning of December, and so maybe a little bit later than usual. Our confirmations are done by the State Hygienic Lab, so that’s saying we know for sure that a test has been sent down there and has been confirmed. Doctors offices do rapid testing, so we know that the flu probably is in our area before then, however it’s just not confirmed yet.”

Four of the five confirmed cases in Cerro Gordo County have been with H1N1 strain. Stiles says that strain is covered by this year’s flu vaccine and it’s not too late to get a flu shot. “It’s important to get it as soon as possible. Now that we know for sure that there’s influenza activity in our area, you want to get it as soon as possible because it takes a couple of weeks for the vaccine to take effect. We’ll continue to have vaccine available through the flu season which goes through June 30th, so we will ensure that we always have vaccine for anybody ages six months and older available here.”

Stiles reminds us that influenza is more of a respiratory illness and not the “stomach flu” that is connected with norovirus-type illnesses. “So we’re going to see fever, aches, chills, some people can have a sore throat, some people can get a cough. It’s going to be very severe. A lot of times people will have body aches and that, it’s going to be more severe than their regular cold. Sometimes people have a hard time differentiating whether they have the cold or the flu, but the flu is going to be more severe.”

Stiles says if you have the flu, the best thing you can do is stay home. “Don’t go anywhere. Don’t go to school, don’t go to work. If you suspect you have the flu and you need to seek medical attention, obviously you want to go to the doctor. There are anti-virals that they can put you on if you are diagnosed early enough to decrease the severity of the illness. Make sure about good personal hygiene habits, making sure you are washing your hands frequently, keeping your hands away from your face, your eyes, your nose your mouth. Staying home when you are sick and taking good care of yourself, eating well and getting plenty of rest.”

If you are wanting to get a flu shot you can go to the County Department of Public Health’s Walk-In Immunization Clinic at 22 North Georgia in Mason City weekdays from 10:00 AM-Noon and from 12:30-4:00 PM.

Americans Are Fleeing NY, California & Illinois To Move Where?!

Ned Beatty, Famous For Film Roles In ‘Deliverance,’ ‘Network,’ And ‘Superman’ Among Others, Dies At The Age of 83