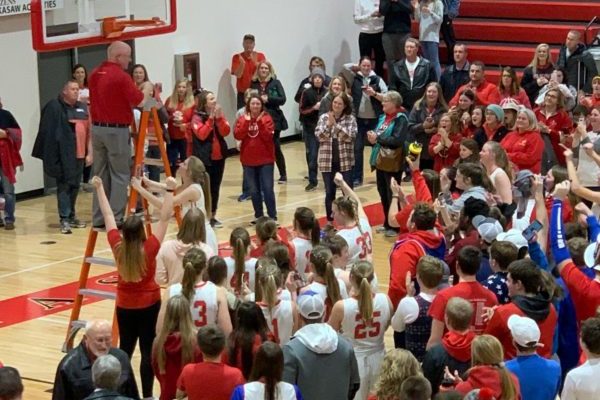 == For St. Ansgar, it’s their first trip to the state tournament since 2001 with a 60-51 win over Central Elkader in the Class 1A Region 3 championship game played in New Hampton, as you heard on AM-1300 KGLO. The Saints outscored Central Elkader 24-13 in the fourth quarter to secure the victory. Coach Scott Cakerice talks about the team’s final quarter adjustments in trying to contain their star Hannah Erickson.

Cakerice says he’s elated to see the Saints girls basketball program headed down to the state tournament for the first time in two decades.

Hali Anderson had 24 points while Madison Hillman added 12. The Saints are the fifth seed in the tournament and will face the fourth seed Montezuma next Wednesday afternoon at 3:15 in the Class 2A state quarterfinals.

== Osage jumped out to a 20-7 lead after the first quarter and held off Emmetsburg 67-60 for the Class 2A Region 2 championship in Garner last night. Sidney Brandau led four Osage players in double figures with 23 points, with Dani Johnson added 18, Ellie Bobinet having 12 and Melanie Bye adding 11. Osage is the fourth seed in the 2A state tournament and will face fifth-seed West Branch on Tuesday night at 8:30.

== West Hancock makes a return trip to the state tournament as they cruised to a 67-28 win over Panorama in the Class 2A Region 3 championship game in Fort Dodge last night. Amanda Chizek had 20 points and 13 rebounds to lead the Eagles, with Rachel Leerar adding 18. West Hancock is the second seed of the 2A tournament and will face Logan-Magnolia at 10 o’clock next Wednesday morning.

== Bishop Garrigan of Algona made it four teams from the Top of Iowa Conference to qualify for the girls state basketball tournament as they beat East Buchanan 63-46 in the 1A Region 2 championship game last night in Hampton. Garrigan is the third seed in the 1A state tournament and will face Martensdale-St. Marys on Wednesday night in the 1A quarterfinals.

WINNEBAGO, NEBRASKA — Both NIACC basketball teams had little problem in their games at Little Priest Tribal College in Winnebago Nebraska. The top-ranked Lady Trojans got a career-high 48 points and 17 rebounds from Autam Mendez on their way to a 120-41 win, giving NIACC their second-straight Iowa Community College Athletic Conference regular season title. Mendez’s 48 points is the second-highest single-game point total in Lady Trojans history. The NIACC men also beat Little Priest Tribal College 100-86. Both NIACC teams finish the regular season at home on Saturday against Southwestern, a doubleheader that you’ll hear starting at 1 o’clock on AM-1300 KGLO.

CEDAR FALLS — Northern Iowa clinched a share of the Missouri Valley regular season crown. A.J. Green was one of five Panthers in double figures with 21 points in an 84-64 win over Evansville. Despite the victory UNI coach Ben Jacobson told administrators earlier this week they would not be cutting down the nets.

The Panthers have also clinched the top seed in the Valley Tournament.

It is UNI’s first regular season championship since 2010.

UNI can clinch sole possession of the title with a win at Drake on Saturday.

IOWA CITY — Iowa women’s basketball coach Lisa Bluder believes a strong finish would allow the Hawkeyes to host the first two rounds of the NCAA Tournament. The 18th ranked Hawkeyes are 13-3 and in third place in the Big Ten heading into Thursday night’s game at home against Minnesota.

The Hawkeyes are 22-5 overall in what was expected to be a rebuilding year.