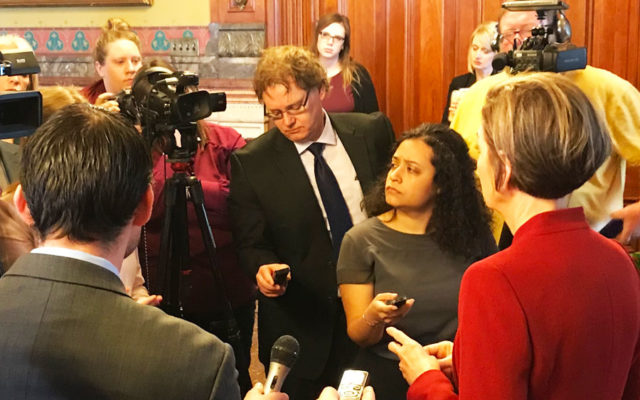 DES MOINES — Governor Kim Reynolds says she fired the director of the state’s largest agency this summer, in part, because of the deaths of disabled patients at the Glenwood Resource Center.

Reynolds has previously declined to discuss exactly why Jerry Foxhoven was dismissed, but Tuesday the governor indicated she grew frustrated with the data Foxhoven was giving her staff about the rate of patient deaths at Glenwood.

“I can’t keep continuing to get these kind of reports. I don’t care if it’s a national average. I know it’s a frail population, but I believe we can do better,” Reynolds said. “…That was one of the many factors.”

The U.S. Department of Justice notified the state in a November 21, 2019 letter that a federal investigation was being launched into patient care as well as allegations Glenwood patients were being used as human subjects in sex experiments. Some Glenwood staff had reported concerns to their superiors, but the governor said those reports never reached her office.

“I first became aware of that when we received the letter from the DOJ and that is when we first learned that there were issues or that that was being done at Glenwood,” the governor said.

Reynolds told reporters Tuesday her administration’s initial investigation soon found “nothing was being done” to address the allegations. Glenwood’s superintendent was placed on administrative leave December 9th  and fired 21 days later. However, the agency manager who approved the sex experiments on Glenwood patients was allowed to retire recently.

“Part of that is doing the due diligence and going through the research,” Reynolds said when asked about that manager’s retirement, “and so we also have to make sure that we have adequate information when we make the decisions that we made.”

The governor said it’s “absolutely fine” for legislators to investigate what has happened and ask new DHS director Kelly Garcia what steps are being taken to improve the Glenwood Resource Center.

“If they have additional questions, she’s more than happy to sit down and walk them through that,” Reynolds said. “No problems whatsoever.”

Reynolds indicated doctors from the University of Iowa are continuing to make trips to Glenwood to evaluate the health of the disabled patients, many of whom are being treated for serious illnesses. Reynolds said the director of the Department of Human Services is in the process of hiring one person who’ll be in charge of all the state-run institutions under DHS management. That would include the Glenwood Resource Center as well as the Woodward Resource Center, which is also under federal investigation for its care of disabled patients.

Reynolds told reporters late this morning that she’s continuing to assemble a team of top managers, with the expectation they will communicate and collaborate with her staff.

Reynolds said she knows “for certain” no one on Glenwood’s staff notified her office of their concerns about Glenwood patients.