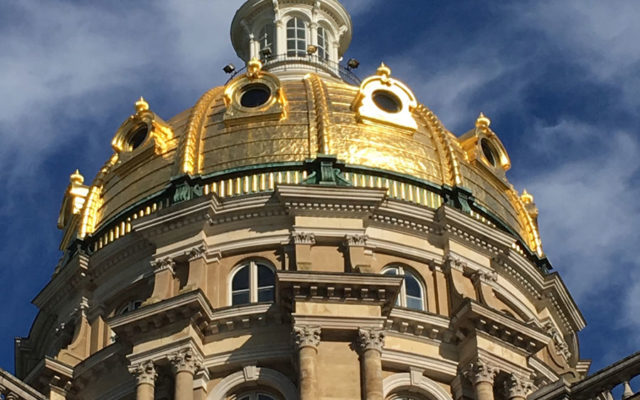 DES MOINES — An eastern Iowa farmer who’s been in the legislature nearly 12 years is proposing a new “corn state” license plate design. Senator Tim Kapucian of Keystone has drafted a bill that would carry out his vision.

“It’ll say at the top of the plate: ‘The Corn State’ and then it’ll be a white plate with black letters,” Kapucian says, “and then behind the lettering there’ll be some type of an ear of corn.”

Kapucian says when he saw how popular the state’s new “black out” specialty license plates have been, he decided to ask his fellow legislators to embrace this idea. Kapucian expects plenty of farmers to be interested in getting one of these plates for their pick-ups.

“I know I’m going to be in line to get one of these if we get it done,” Kapucian says.

Kapucian’s neighbor has a license plate collection. It includes a mid-1950s black-and-white plate that has “THE CORN STATE” in capital letters at the bottom of the plate.

“Every state has something on their license plate that makes them stand out and we used to have that…If people recognize an ear of corn, they’ll think: ‘Iowa!” he says. “You know you see the bucking bronc with the cowboy, we know that’s Wyoming.”

Kapucian’s plate plan has cleared a Senate subcommittee. His bill would have to pass through at least five other steps in the legislative process before it could be sent to the governor for review.