MASON CITY — Nobody was injured when part of the roof at a westside Mason City business buckled due to heavy snow earlier this morning.

Mason City Fire Department Captain Jack Odegaard says they were called to Cost Cutters at the Plaza West shopping center at about 9:30 for a structural collapse. “We meet the business owner and his wife outside telling us what happened. The ceiling tile came down and they could see the deflection of the roof and stepped outside and saw this, and that’s when they decided to call 9-1-1. We evacuated their store and Cosmo Prof as well to make sure they were safe. We also shut down Dollar Tree. We don’t want people walking into this area where it could possibly go through.”

Odegaard says fortunately nobody was hurt in the incident.  “Nobody hurt. Currently they have a structural engineer, a water engineer, and the crews are going to build another structure to support the roof and get the snow off, that’s the current plan.”

Odegaard says while it is rare, we do once in a while see heavy snow cause a roof collapse.  “It’s hard to tell, but yeah, the first part of that snow was very wet, and then the problem is that it drifts. Everything keeps blowing and you then get these monstrous drifts, and that’s the big deal. It’s then not like we got eight inches of snow, it’s that it might be eight inches at your house and 26 inches at the house next door, and then eight foot like right here.”

The owners and management of the Cost Cutters store were at the scene but declined to go on tape with an interview, but told KGLO News that they were in the store getting ready for the day when the roof buckled and are glad that no one was injured. 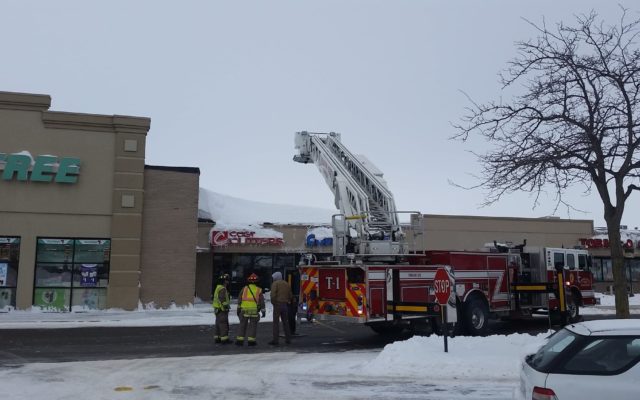