CHARLES CITY — The bill named after a Charles City teen who died after sustaining brain injuries in an ATV accident is now law.

The law will let people signal their intentions to be an organ and tissue donor when they buy a hunting or fishing license. Governor Kim Reynolds was in Logan Luft’s hometown Monday to sign what has become know as Logan’s Law.

“It is my great privilege and honor to sign Logan’s bill into law. Luft tough,” Reynolds said, to applause.

The bill signing ceremony was held in the Charles City Middle School gym, the same place where the boy’s funeral was held.

“By him signing on to be an organ donor, he saved multiple lives,” Reynolds said. “…Where else would we have signed it, but right here? And the gym was full with a compassionate, caring community that has lifted the Lufts up through some really tough, tough times?” 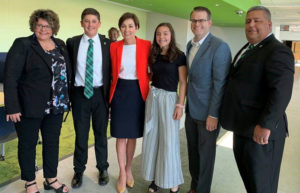 The Governor and Lt. Governor following the signing.

Logan Luft was 15 when he was involved in an ATV accident on the 4th of July. Five of his organs were donated to others. Since teens are able to get hunting and fishing licenses in Iowa, they may declare that they wish to be an organ donor just as Logan was.

“This is an opportunity to really allow young people to have the same impact that Logan has had on individuals and families,” said Reynolds.

Lenny Luft, Logan’s dad, said his son was an avid outdoorsman, and this is a fitting tribute.

The long process of lobbying legislators to pass Logan’s law was a learning curve for the family, Luft says. He also says seeing how his son’s organ donations benefited five others helped the family through its grieving process.

“By having organ donation, it has saved us as a family as a whole just because it has given us purpose,” Luft said.

Cerro Gordo County holding final mass COVID-19 vaccination clinics this week, some level of normalcy for the department near