DES MOINES — The need for housing was the primary concern raised Wednesday during the first meeting of the governor’s Flood Recovery Advisory Board. Governor Kim Reynolds said the state is waiting for the Federal Emergency Management Agency to respond to a request for temporary housing trailers.

“Over 25,000 homes have been demolished or have had some kind of damage and over 4200 businesses and my guess is that’s probably still on the short side of the numbers that we’re going to see as we move through the process,” Reynolds said.

FEMA is approving some money for individual homeowners to repair “essential living space.” Cindy Axne, who represents southwest Iowa’s third congressional district, told the governor she’s met with flood victims who’ve been told they won’t be getting grants to repair their entire home. 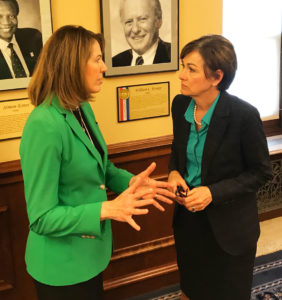 Some flood victims may be able to get federal aid to cover living hotel bills. There’s a meeting tonight in Glenwood for residents of Pacific Junction. Officials hope to gauge who plans to stay and who plans to leave the flood-ravaged community.

Iowa’s Republican governor and Democratic Congresswoman Axne talked after the meeting to discuss collaborating on the flood response. Both opened the meeting by emphasizing bipartisanship.

“It’s going to just require a significant amount of coordination, not only at the local, state and federal level. I’m so appreciative that Congresswoman Axne is here. It’s going to take all of us working together,” Reynolds said.

A few moments later Axne said: “I want everybody to understand this is fully an Iowa issue. This is not a partisan issue. This is something that we’re all working on hard together.”

The head of Iowa Workforce Development reports 95 people have filed for unemployment benefits because they’ve lost their job due to the flooding.