DES MOINES — Republicans in the Iowa House have dismissed a request to open and count 29 absentee ballots cast in November’s election for a northeast Iowa House seat.

Representative Steven Holt of Denison spoke for his Republican colleagues, arguing the ballots lacked a specific kind of Postal Service tracking number to determine if they’d been mailed on time.

“We do value our votes, all of us do in here, which is why I think it’s so important to follow the rule of law when we have a contested election such as this,” Holt said. “This isn’t comfortable. This isn’t pleasant and we don’t change rules in the middle of the contest.”

Republican Michael Bergen of Dorchester was declared the winner over Democrat Kayla Koether of Decorah by just nine votes. Bar codes sprayed on the ballots were checked in December and the Postal Service concluded the 29 were mailed before Election Day.

Representative Marti Anderson of Des Moines was among the Democrats who argued those ballots should be counted. “We don’t know who those ballots were cast for,” Anderson said. “Why not count every vote, so that the true winner is seated? Don’t taint this seat with doubt.” 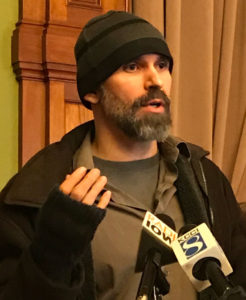 Liam Murphy of Decorah is one of the 29 people who cast an absentee ballot that was mailed in Decorah the day before the election, but not counted because the envelope lacked a postmark.

“When it was negated even though it was valid and I’d followed every rule and protocol, I felt like they were making me a non-person ahead of time,” Murphy said during a statehouse news conference early this afternoon.

Murphy has been undergoing cancer treatment.

“When you’re facing kind of life-and-death things, the smaller details of your life become more important,” Murphy said. “My vote in this election became something of an extension of my personhood, like who I was.”

Koether and nearly 20 people made the trip from Decorah to Des Moines Monday to lobby Republican lawmakers. “They are making a choice here of how to interpret the law and whether they will do so in a way that will include these 29 voters who want their votes to be counted,” Koether said.

Koether at this hour is on a bus, headed back to Decorah and listened to the final hours of the House debate on a smart phone. Over the next few days, Koether told Radio Iowa by text that she plans to talk with the group who cast the uncounted ballots and see what they’d like to see happen.

Several Democratic lawmakers argued the group could sue on the grounds that their constitutional right to vote had been violated — and they’d been treated unequally as absentee ballots in other counties cast in the same way had been counted.