“This new education funding helps us continue moving forward to get our young people ready for the challenges of the 21st century economy,” Reynolds said during a bill signing ceremony in the capitol, “and that’s why education is and will continue to be a top priority.”

One bill increases the state’s per pupil spending on public schools by 2.06 percent. In the other bill, per pupil spending in 170 districts is boosted by $5 per student, to correct an inequity in the state’s school funding formula. There’s nearly $8 million in that bill as well to increase state spending on school transportation budgets to help rural districts struggling to pay for busing students to and from school.

“I want to commend lawmakers for their quick action on school funding this session,” Reynolds said. “Having these bills to me in February will 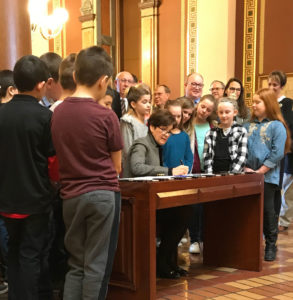 School boards are required by law to certify the budgets for the next academic year by mid-April. A state law requires the legislature to make the basic decision on school funding by mid-February, but there’s no penalty for missing the deadline. Lawmakers have often been tardy in taking final votes on school spending plans.